The quilt will begin its show at the mall from August 29. 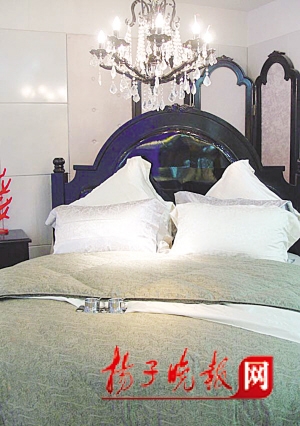 “At the moment, it is on show at luxury malls around China and then will be transported to Tianjin by air express after the show is over. We will also send special staff to secure it when displayed in the city,” said one manager surnamed Yuan, who is in chare of the sale.

When asked why the quilt cost so much money, he explained that the quilt is made of fine down of Iceland goose. The down, hailed as “soft gold”, is the most expensive down in the world and extremely hard to gather.

It took the quilt manufacturer four years to make 10 quilts and each quilt requires over 100 separate procedures to assemble, Jiangsu-based Yangzi Evening reported.

The 10 quilts were finished in 2008; only two of them remain unsold until now. The other one is in central China’s Changsha, where the quilt manufacturer is headquartered.

Most of the buyers are wealthy businessmen, according to Yuan.

The 298,000 yuan quilt is worth six times a similarly sized quilt made entirely of RMB 100 notes, and over 9 times an average local citizen’s annual salary.

Some buyers have already shown their interest, and a couple of potential customers have contacted Mr. Yuan already, he said.

But local website Tianjinwei.com reported that when asked if she would consider buying the quilt, one local resident, Ms. Xie, replied: “No way. With that money I could buy a new nice car.”

Popular posts from this blog

March 01, 2012
Here is a quickie crochet project! An almost too cute to use flower dishcloth, that a fellow group member, posted pattern for. It was fun and easy! Only took about 30 min, and I used varigated yarn instrad of solids, still turns out lovely.
Published with Blogger-droid v2.0.4
1 comment
Read more

Christmas Crafts I made for family members…2012

Shawna
Iowa, United States
I am a fiber fanatic! I have been quilting for several years now and became addicted at my first class. I also really enjoy crochet and knitting, embroidery, cross stitch, some crafts, and reading some fairytale or paranormal type book. I especially enjoy combining an audible book with my fiber time ;)